What is your technology?

The Kria ionizer, a superoxide generator that injects superoxide into the water column for the remediation of any organic pollutant, will kill any bacteria or virus, cyanobacteria, and microcystin, and will oxidize many metals. The technology creates superoxide from the open atmosphere with no chemical input. It is highly energy-efficient and portable, weighing 1,000 pounds. Electrical operating costs are about 45 cents/hour and it will deliver 13,000 pounds of superoxide per day. This technology can be used in the field or in a water treatment plant and can be adapted for use in emergencies, such as hurricanes to provide treated water. Installation can be done in about an hour and only requires a licensed electrician.

Superoxide is a type of oxygen that carries a negative charge (has an extra electron). This electrical charge allows superoxide to engage in Fenton chemistry, which simply is where the superoxide reacts with the carbon atoms in any organic contaminant and forms CO2. This results in the contaminant being dismantled at the atomic level and leaves no residue to be disposed of. An example would be oil, which is primarily carbon and hydrogen. The superoxide would react with the carbon to form CO2 and with the hydrogen to form water. Unlike ozone or chlorine, superoxide is perfectly safe and requires no safety precautions. 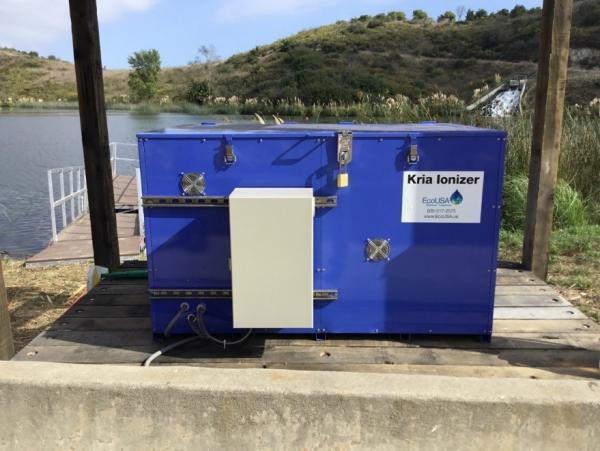 What are the benefits of implementing your technology?

Superoxide will eliminate the most difficult to treat contaminants such as PCBs, dioxanes, PAHs, and the perfluorinated compounds like PFOA and PFAS (Washington State University research). Cyanobacteria cells die in four minutes and the neurotoxin, microcystin, is also destroyed. There is no known bacteria or virus that can withstand assault by superoxide. Superoxide lasts about one week in the water column, meaning that long-term protection against further contamination is provided. All of these contaminants are treated without the use of chemicals and leave no secondary pollution to clean up.

The Kria ionizer is an ideal technology for treating lakes and reservoirs since it will address a wide range of problems and will not harm life in the water column with the exception of zebra mussels. Superoxide is injected into the water column and can be thought of as an aeration system ­- although at a much higher level of operation. The addition of superoxide to a lake is done with only two hoses and no in-water plumbing is necessary. Because of the electrical charge, superoxide is self-spreading and will reach depths of 300 feet, allowing treatment of contaminated sediment. 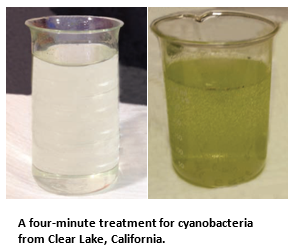 Has the technology been tested, demonstrated, or implemented anywhere to date?

The Kria ionizer is a commercially available product. The first American sale was to a fracking water company where three machines are operating in Texas rehabilitating fracking water for reuse. The next scheduled installation will be in a Los Angeles area bay for treating bacteria, pesticides, and copper. In Japan, sales were made to Kyushu Electric for cyanobacteria in some reservoirs, several fish hatcheries, a Koi operation, and a lake at Ueno Zoo in Tokyo.

Two published research papers about the ionizer are available by Dr. Victor Medina. Lab testing has been performed on PCBs, oil, cyanobacteria, various metals, and bacteria. Tests are slated to begin in November 2019 for PFOAs, PAHs, a number of metals, and wastewater from an onion-growing operation.

What are some of the next steps needed to advance the technology?

Marketing of the Kria ionizer to various industries that can benefit from the use of superoxide now becomes very important. Superoxide is relatively unknown and educating the public is critical. Projects such as the bay in Los Angeles will be very important in showcasing the unique remediation capabilities of superoxide, as well as its economic benefits. The upcoming lab tests for such “forever chemicals” as PFOA, PFAS, and PAHs will, should they be successful, open very large potential markets for the technology. For centuries, humans have been creating chemicals, but finally, there is a technology available that can take these same chemicals apart atom by atom and do so safely.

LIFT can play an important role in informing important industry segments about Kria superoxide technology. Its members are the prime target market for the Kria ionizer as they are the providers of our country’s drinking water and treatment of wastewater. LIFT’s technical expertise is an invaluable resource.
Michael Mangham
LLC Founder and CEO
EcoUSA

WRF Announces the Release of RFPs for 12 Research Projects

Cyanobacterial blooms (also referred to as harmful algal blooms) can result in the release of cyanotoxins (or algal toxins). Several studies have investigated the toxicity of cyanotoxins and documented their...